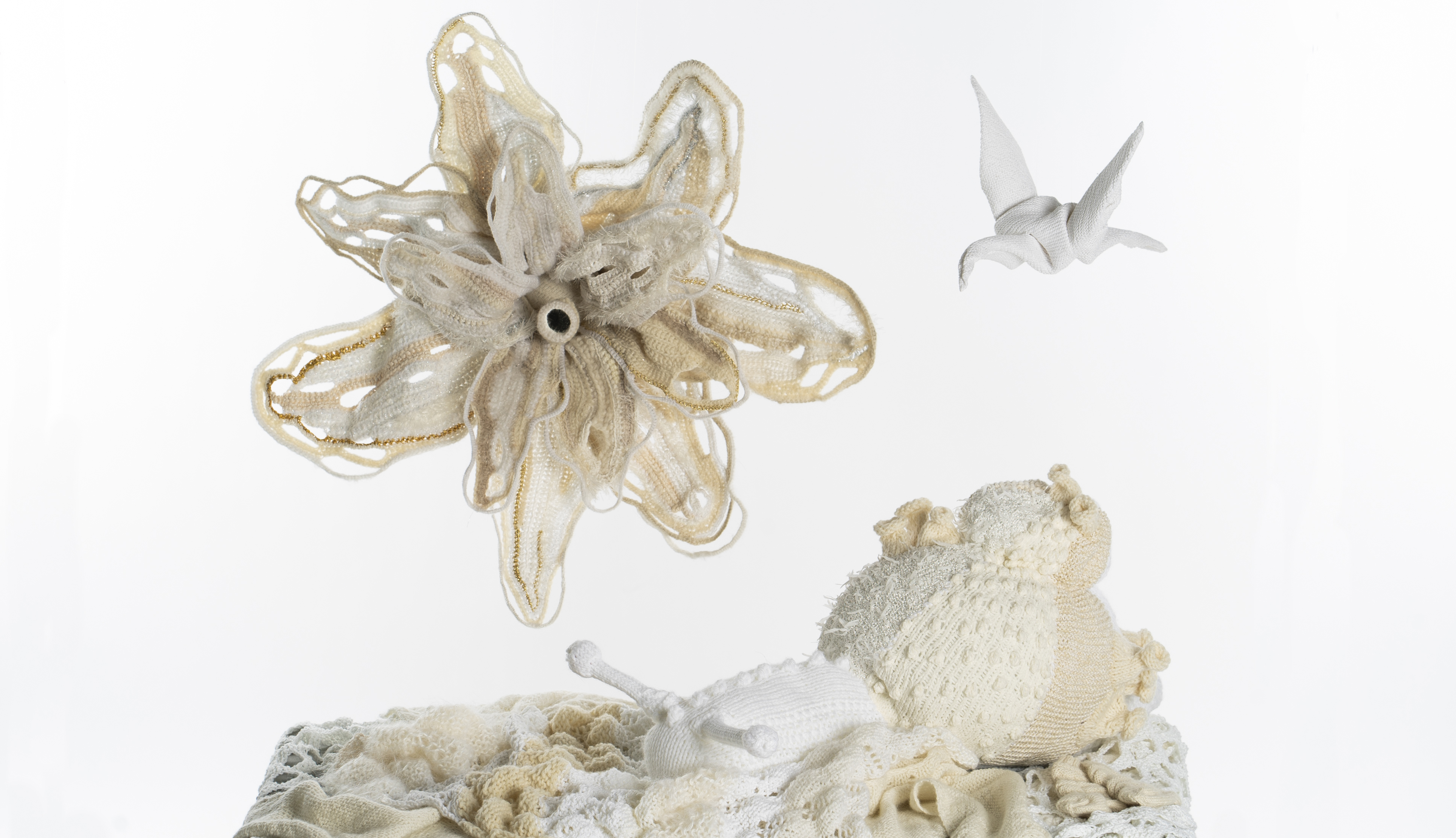 We knit for peace

Is it possible to knit peace?
Can striving to create change achieve something tangible?

Based on these questions, the Knitting Peace show was produced by Cirkus Cirkör: a poetic contemporary circus experience featuring dizzying artistry set in a world of threads and balls of yarn. This year when Sweden’s textile capital celebrates its anniversary, the power of textile crafts will be manifested in an exhibition based on Knitting Peace’s peace message. In 6 display windows in central Borås, Textilmuseet and Borås City present over 100 works, sent to the Textile Museum from both Sweden and abroad. Thank you to all those who have contributed! Next year Cirkus Cirkör will present the Knitting Peace show in collaboration with Borås Stadsteater, as a tribute to textile crafts and Borås textile heritage.

‘The pen is mightier than the sword’ is a well-known proverb, but perhaps a pair of knitting needles could be just as powerful? Around the world, people are involved in creating a better world using craft as a method. This can relate to peace, non-violence, gender equality, inclusion, or anti-consumerism. This peaceful way of protesting and expressing one’s opinions through crafts is a grassroots movement that has been named ‘craftivism’. For this exhibition, we asked three questions to those who contributed: Why do you knit? What do you strive for? Is it possible to knit peace? You can read all the answers we received in this digital catalogue, where you can also read more about craftivism.

During its journey around the world, the Knitting Peace show has encouraged people to become involved in knitting for peace, and peace knitters have shared their works and thoughts about the movement. The number of knitted pieces that has been submitted is overwhelming, and it is clear that the combination of circus, striving for change, and knitting has grown into a movement that spans several continents. Through the Knitting Peace show and the exhibition, threads of craftivism from New York, Rosario and Girona have been braided together with Alby, Säffle and now Borås.

It is our hope that the exhibition will inspire belief and involvement in making a better world together with others – or simply make your fingers itch to knit something. Here on the Textile Museum website, you can find knitting patterns, tips and activities from us and our partners.

“True magic happens when we create with our hands and dream from our hearts.”

– Betsy Greer, sociologist and originator of the term ‘craftivism’

‘We Knit for Peace’ is a collaboration between the Textile Museum of Sweden, Cirkus Cirkör, Borås City, Borås Stadsteater, and Hemslöjdskonsulenterna of Region Västra Götaland.

by Aino Ihanainen, circus performer and knitting artist in the Knitting Peace show

“A patchwork quilt, circus, a sanctuary.

I have sewn together pieces of knitting that people have sent us over the years, and out of the small pieces something larger grew. Different ages, nationalities, skin colours, knitting experiences... Here, all of them come together and strive towards a common goal.

I knit because it makes me stop and breathe. The movements of the hands and stitches that run through the needles help me to attain a meditative state where there is no room for bad thoughts. And that is the foundation on which to build peace; one’s own mind.”

Doves of Peace for the Swedish Parliament

by the Knit for Peace group in Broby, Sweden

Sticka för Fred is an example of an activist group that strives to change the world for the better using knitting. They began as a “regular knitting group”, but a Knitting Peace show in Copenhagen in 2014 motivated them to take action through various activities in society. They have engaged in a refugee accommodation, participated in exhibitions, and organised study circles, lectures, and guerilla craft actions in collaboration with ABF (‘workers’ educational association’) and Östra Göinge Municipality. Primarily, however, they knit white doves, inspired by those submitted in response to a call to action in Copenhagen. The doves are sent to influential people all over the world with a simple message of peace and mutual understanding. So far, more than 500 doves of peace have been sent to e.g. party leaders, embassies, and the former US president Donald Trump. The ones perched here are some of the 349 doves that will fly away to the Swedish Parliament after the exhibition.

Through their activities, Sticka för Fred has come into contact with many people all over the world. Facebook friends in Burma, Afghanistan, and the Philippines have been sent doves of peace, and letters of thanks arrive from the most unexpected places. A group that has become especially important is the Spanish organisation Harituz and their project Madejas contra la violencia sexista (‘Balls of yarn against sexual violence’). Their knitted scarf with embroidered messages travels from city to city and continually grows. In collaboration with Sticka för Fred, parts of the scarf have been exhibited in Sweden.

A number of years ago, the Danish artist Marianne Jørgensen protested against Denmark’s involvement in the Iraq War by covering a tank in a knitted pink yarn. The covering was made up of over four thousand hand-knitted squares, made by people all over Europe and the USA. Through soft and warming yarn, and by letting stitch slowly be attached to stitch, thousands of people both made and manifested resistance.

Naturally, the tank action is just one of many examples. But the fact is that knitting – along with other types of crafts – is being used today with increasing frequency in contexts that are not related primarily to decorating the world, but to changing it. There is even a diverse and widespread global movement: craftivism. The word is a combination of ‘craft’ and ‘activism’, and under this umbrella an abundance and variety of ambitions are gathered.

Take the knitters who encourage people to break rigid handicraft norms and knit from a queer perspective in order to highlight LGBTQ issues, for example. Or those who want to counteract consumerism or mass production and promote a DIY attitude, in order for us to take a long-term view and be less wasteful with nature’s resources. “The revolution is being handmade”, to quote a well-known slogan, which perhaps appeals most to those involved in ‘shopdropping’ – the opposite of shoplifting. Instead of stealing people sneak self-made items onto the shelves of stores in order to make people reflect, or to cause confusion and sabotage the machinery of commercialism. Consider also the downloadable knit and crochet patterns available on the web that allow people to crochet bags designed by exclusive brands, thereby drawing support away from multi-national corporations that exploit poor workers, and at the same time conquer something much-coveted. Or take the parts of the women’s movement that express themselves through stitches, such as the activists in Washington who knitted and crocheted wombs that represented their fight for women’s rights to autonomy over their own bodies. Or – of course! – the long heritage of charity knitting, the knitting and giving movement, where packages of warm clothes go to war-torn countries and the poor – even if that particular movement is not normally associated with craftivism. There are many, many more examples.

Goals and driving forces vary. What they have in common is the use of yarn as a road to change. But if we ask why this particular material has such an appeal, the answers vary. Some choose yarn simply because they feel at home with threads between their fingers and enjoy knitting. Some of the graffiti knitters who tack yarn graffiti onto lampposts and bridge railings belong to this group. “It is fun and we want to make others happy” is one explanation that recurs. Others who make yarn tags instead see the yarn itself as a carrier of messages. Such activists want to ‘soften’ the city environment or put a respectful spotlight on frequently underappreciated and often female-coded experiences, for example. Sometimes, they also want to enhance the experiences of present and active people in public spaces that are generally characterised by market forces.

Or all of the above at the same time.

The Dane Marianne Jørgensen, who features at the beginning of this text, feels that the colour of the yarn was critical for the covering of the tank. The threads were shocking pink. “Disarming”, Jørgensen said, and went on to discuss the qualities of knitting in this context: “Unlike war, knitting signals home environments, care, nearness, and time for reflection.”

Slowness and reflection in particular are sometimes perceived as being in short supply in today’s society. But by adding stitch to stitch at a leisurely pace, knitters set aside time to think. And they do it using something as simple as a thread and a pair of needles – the opposite of high technology. It could hardly be more basic.

Even conversations are basic, and a classic method of achieving change; just think about how diplomats work. But good conversations presuppose non-threatening environments. It is precisely this perspective that the American artist Lisa Anne Auerbach, who often works with yarn and knitting, has sometimes used as her starting point. The brown mittens of woollen yarn, which she made a number of years ago, have become well-known. They are classic in shape. But instead of squares, stripes, and stars for decoration, these bear numbers representing the number of Americans killed in the Iraq War. Auerbach knitted the mittens on the bus while the war was going on, and so as her work process continued the numbers on each pair of mittens increased. And precisely because she knitted, she argues, she often became involved in conversations with other passengers. The technique is disarming. Auerbach used – just as so many other knitting activists do – the fact that knitting is often perceived as everyday and harmless. And immediately there were discussions about war – and peace.

Yes, that is exactly how knitting can be used. As a way of changing the world, stitch by stitch. . Or as Auerbach herself put it: “Consume less. Create more. Knitting is political. Begin immediately.”