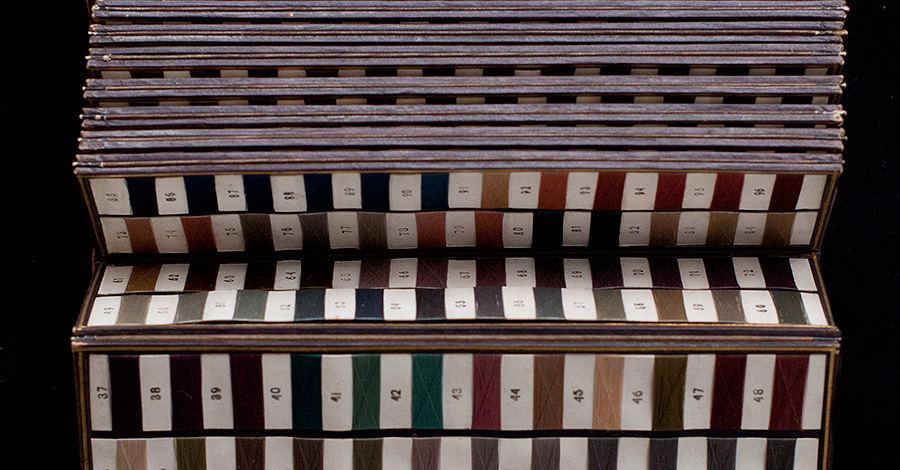 What is unique about the Textile Museum of Sweden's collections is the genuine material, which represents both Swedish and, to some extent, foreign textile and ready-made clothing companies – over 150 in total. This type of relatively simple, ready-made clothing represents something quite rare in museum collections – examples of what real people wore on an everyday basis.

the fashion and dress collection

A large part of the Textile Museum of Sweden's fashion and dress collection is comprised of examples of fine and festive clothing. The period 1870-1920 is well-represented, with exclusive fashion garments in silk, velvet, lace and woollen broadcloth. There are clothes of a more everyday nature, primarily from the 1930s and onwards, although the museum also possesses several examples of so-called folk fashion garments from the 19th century, i.e. rural clothing inspired by current fashion and used by the peasantry in parts of the country which had no local dress tradition in particular.

The traditional folk costume material comprises both original garments from the Sjuhärad area and newly-made regional costumes from all over the country. Especially important is the large collection of original garments in a very old-fashioned traditional style from Toarp parish, which is situated east of Borås.

The collections of the Textile Museum of Sweden do not consist exclusively of garments, but contain other textile objects as well; embroideries, patchwork quilts, feather beds, cushions, tablecloths and rugs have been collected from rural environments. In addition, more modern utility textiles and products have been collected.

A large part of the museums collected textiles comprises lengths of fabric with printed or woven patterns, the manufacturers of which are found primarily among the many textile companies of the Sjuhärad area. The collection is a repository of both textile pattern design and the development of textile printing technology, and spans more than a century.

Another category of objects that the museum manages is religious textiles. These include e.g. a 17th century chasuble with an applied 14th century embroidery, as well as an antependium from 1699 which was supposedly created for the consecration of the chapel at the castle of Torpa Stenhus, which is situated southeast of Borås. The museum also has a small collection of archaeological textiles from Egypt, so-called Coptic textiles.

The museums collection of textile art consists of examples of textile works originating mainly from the period of the 1960s to the 1990s, and primarily by artists from or active in Western Sweden. More recently, works by the winners of the Nordic Award in Textiles have been purchased, and the collections have also been added to with examples of contemporary textile art through investment funds made available by the City of Borås.

The Textile Museum of Sweden has a great quantity of fabric samples – roughly one million individual pieces, most of which are in the form of sample books from various textile companies. In several cases, the sample books have been organised according to seasonal or yearly collections, making it possible to follow the entire output of a company from year to year.

The Textile Museum of Sweden also has a large study, or handing collection. On the whole, the study collection reflects the other collections of the museum, but its pieces may be handled in a freer manner, as they are not entered into the museums catalogue. The clothing of the study collection can be used, washed and exhibited without restrictions. In spite of – or perhaps because of – their status as non-museum objects, the pieces are an important part of the museums collections. They make it possible for visitors to try on and touch older textiles and clothes in a way that is impossible with normal museum objects.